Alongside indoor plants from yucca to luxury orchids, natural foliage is making a big return to lifestyle choices in home decor.

Social media sites, Pinterest, Instagram, and Twitter are currently alive with suggestions for designers and homeowners searching for the right psychological effects from bringing environmental magic inside. Panespol® saw the trend coming a few years back when it launched its now best-selling Natural Moss panels.

Anyone who has walked in summer through the moss-covered forests of the northern hemisphere—in Europe or the Americas—will know the spell this simple plant form can exercise over our minds.

Alluring, comforting, cheering. Moss bring a silence to environmental splendours, calming the atmosphere. Its blanketing surfaces have a subtle suggestive power that works unconsciously on the emotions. This common woodland carpet, made (in most species) of leaves that are just one cell thick, offers a brushed but springy tactile sensation, a subliminal reminder, perhaps, that we just should give and take with a little more tolerance and grace.

Bringing its charms into interiors, then, must be a good idea; Panespol’s® imaginative Natural Moss systems draw on an ancestral appeal that has a surprising history in not only folklore, but also medicine and magic.

And, of course, it has long been used in decoration, not only in landscape gardening, but inside houses as table centres.  It is a traditional Christmas adornment in Mexico, while the Irish have long placed moss beneath carpets to bring good fortune and prosperity.

The belief that moss brings good luck was responsible for its use in magic over the centuries as an ingredient in spells related to what esoterists call Jupiter matters (growth, legalities, money, and spirituality).

It became a fad in the late 19th century to construct decorative mosseries on wooden structures in British and American gardens.

In the UK, one type of moss was used in bygone times to extinguish fires (due to its exceptional water absorption). For Native Americans it was an important cultural symbol of the goodness of nature, providing them with paint applicators, sponges, bedding, diapers, and bandages.

The latter use was widespread in WWI for dressing soldier’s wounds. 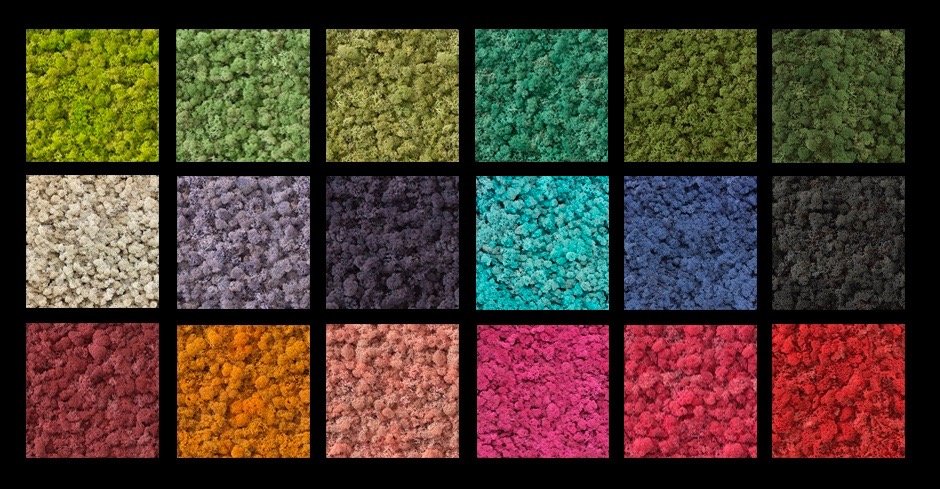 Through a neutralising and fixing process called “vegetal stabilisation”, Panespol® has made real moss imperishable for application in interiors (an indoor humidity of at least 50% is necessary for it to be at its best), keeping its freshness and beauty.

This intelligent blending of craft, technology, and ecology has given a noble texture of a range of seductive colours, all of them achieved using eco-friendly pigments, providing spectacular surfaces for modern design contexts ranging from hotels, arts areas, restaurants, business facilities, airports, and genuinely sophisticated home spaces.